Yes, You Can Breastfeed After a Breast Augmentation 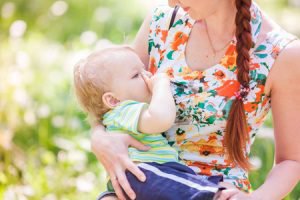 There are many questions that surround the breast augmentation process, but for young women who plan to become mothers in the future, one of the biggest questions concerns breastfeeding with breast implants. Is it possible? A scientific research study conducted by Dr. Mark Jewell and his co-authors Michael Edwards, M.D and Diane Murphy, MBA, states that yes, women who undergo breast augmentation can enjoy breastfeeding without any negative complications.

Jewell’s study reviewed lactation information of about 6,000 women who had saline implants or silicone breast implants when they breastfed their babies. This data was compared to the information from women who breastfeed with natural breasts, making for the second largest population study of lactation following breast augmentation.

According to the results of Jewell’s investigation, “women with either the inframammary or periareolar incisions for the augmentation can breastfeed normally and not have a greater incidence of lactation-related issues than a normal population of women who do not have breast implants. Approximately 94 percent of infants were able to suckle normally.” These results echo the findings of the first study on this topic, which also concluded that “there is no scientific evidence to show that the various types of breast implants interfere with the process of lactation or breastfeeding.”

More About Breastfeeding After Augmentation

It’s actually the state of the breast before augmentation that determines the amount of milk a mother can make after augmentation surgery. Certain breast types are more likely to struggle with insufficient glandular tissue, which decreases milk production capability. Also, as mentioned above, the location of the augmentation incision has a direct correlation to milk production, so women who plan to breastfeed in the future should bring the topic up with their surgeon, such as Tampa plastic surgeon Dr. Bruce Landon, to ensure that they undergo either the inframammary or periareolar incision forms, which go under the breast or around the nipple.